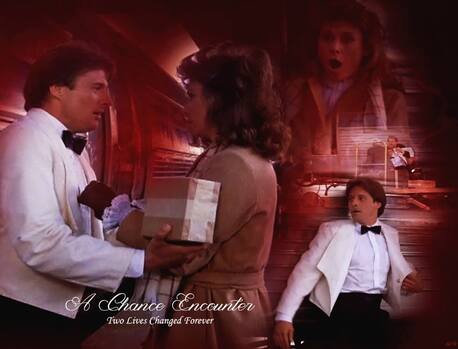 Fate. The Dictionary defines it as "the development of events beyond a person's control, regarded as determined by a supernatural power." Then is life so predestined that even though we are on different paths, we find ourselves in the right place at the right time or the wrong place and the right time, depending on the way we look at it? Nevertheless, fate certainly has a way of stepping in and changing lives. Call it destiny, providence, chance, luck, kismet, whatever; however, I have no doubt, if my original plans to attend college in Hawaii had gone through, I would have never met and married my husband.

Now imagine being a divorced suburban mother dropping your boyfriend off at the train station, because he predicted a 35% chance of rain and didn't want to get his car wet. You are minding your own business, when out of nowhere, a strange man dressed in a rumpled waiter's outfit, suddenly grabs you and asks you to walk with him. At first you try to pull away, but he begs and pleads with you to help him. Your first instinct is to run, but something about his eyes and the desperate look on his face, convinces you to agree. You get on the train to deliver the package to the "man in the red hat", only to discover there are twenty-five men with red hats on the car, so you take the package home instead. Now imagine what would have happened if Amanda had followed the directions Lee had given her and delivered the package? Would they have ever met again? Would he have ever sought her out? Would they still have become reluctant co-workers, then best friends, later lovers, and finally man and wife? Who knows? Nevertheless, I'm sure she never thought a random chance encounter would have turned her life inside out and upside down.

In a single moment everything changes, and life is a series of. . .  chance encounters.

Preheat your oven to 400 degrees and be ready to cook for one hour. Mix in one part secret agent, codename Scarecrow, one part Amanda King, a divorced housewife with two children, a mortgage, and a station wagon, 35% chance of rain, 25 men in red hats, romance, comedy, sexual tension and throw in the Cold War for good measure, and you have the perfect recipe for a lighthearted spy drama, whoops, I mean intelligence serial.

Scarecrow and Mrs. King was a weekly television series that ran from 1983 to 1987, starring Kate Jackson and Bruce Boxleitner. After Amanda becomes inadvertently embroiled in a secret mission, saving Lee Stetson (Scarecrow), the Agency section chief, Billy Melrose, teams them together. As the series progressed, she went from 'just helping out' to becoming a full-time spy herself, but she's forbidden to tell her family about her job, so she must keep her missions to herself, with often some hilarious results.

Naturally, trouble seems to always find Amanda, but she has good instincts, and her ‘own style,’ and together, her and Stetson become the best team the Agency has. In addition, as things changed professionally, for Lee and Amanda, they also changed personally; sparks flew, tension turned to passion, and they became partners in every sense of the word.

Acknowledgements: A special thanks to my beta readers (you know who you are). I couldn't have done this without you!! Also thanks to Sarah (aka WhisperRomance/LoveSMK) for the signature and wallpaper designs, Lizzie for the "Chance Encounters" Header, IWSOD, Annette, and Sarah for the SMK screen captures, and Heidi and Lizzie for the TV Guide Ads and magazine covers. In addition, thanks to my sister Cathy, who is a real historian and helped me with historical timelines and is also my biggest cheerleader. And finally to my husband Ed, who tolerates it all.